During the first week of June, Kris, Matt and myself travelled to western Ontario in the Thunder Bay region to backpack part of the Kabeyun trail in Sleeping Giant Provincial Park.  The park’s unique name reflects a native traditional legend about a protector of the land, who had killed men to protect the silver mineral secret of the area and was punished by being turned to stone in a laying repose — hence the Sleeping Giant.

The Kabeyun trail runs the length of the Giant and the shoreline of Lake Superior. Our hike would be seeing a section of the trail, backpack to our campsites, set up camp and then hike to different areas in the park.  The trip was a redux for Matt, who had attempted to hike around the Giant a couple of years ago, but was turned away after encountering a bear and three cubs near the first campsite.  Matt had such an eventful time, he was seeking to complete the park’s trails in this attempt, with less of involvement from large mammals.  Matt’s mis-adventure did make for a great sidebar whenever we encountered anything that would remind him of the previous trip (trees, noises, campsites, birds).

In traveling such a distance to the Thunder Bay area (16 hour drive from Toronto – half day flight from the Maritimes) – we needed to do some tourist type visiting along with our backcountry adventure.   As I viewed the terrain from the plane and saw what was in store for us at our bookending campsites at Kakabeka Falls, I was immediately impressed by the grandeur of the region.  Large canyons, unique mountain tops, sheer cliffs, expansive fresh water and distant views dominated most places we visited.  This area of Lake Superior is truly a rugged and beautiful area of Canada. 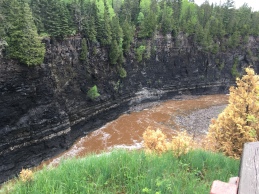 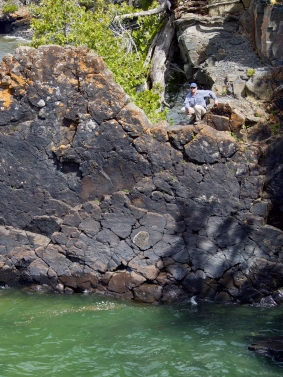 Standing on the Seahorse

We began our three day backpacking adventure hiking around the Sleeping Giant.  Our first day, we hiked about 9 kilometres plus side trails and then camped at Lehtinen’s Bay.  From the bay, the view of the brown cliffs and calm water from the campsite was remarkable.  Seeing the immense fresh water lake before us was also humbling – and comforting in a way as we could also use the water if we needed. 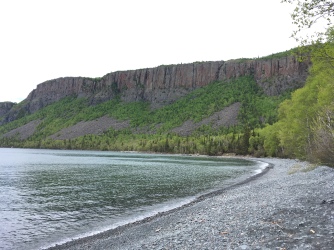 Looking at the knees

After setting up camp, our days end side trip involved heading on the Top of the Mountain trail to the Chimney.  Normally at 22 kilometre return trip for day hikers, we had cut off a few kilometres in our backpacking — but that did not reduce the challenge of going from lake shore to 300 metre cliffside.  Our legs were feeling the elevation gain, but it was soon worthwhile with the views we would encounter.  The water was pristine and tropical looking from this height.

From the trail, we also had our first views of Silver Islet – a tiny island offshore in Lake Superior that was formerly the site of lucrative silver mining operation in the late 1800s.   The history of Silver Islet is captivating and exemplifies the perseverance and hardiness of the people of that time – a real Canadian story.  (This video is shown at the park in the interpretive centre.  It is well worth the thirty minutes of watching.) Based on the wind and the waves we experienced on our hikes, I can only appreciate how challenging it must have been  in years past to live and try to work around Lake Superior. 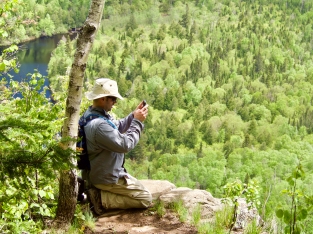 After our views of the southern coast, the Top of the Mountain trail lead us to the Thunder Bay side of the Giant’s knees and most notably the Chimney.  The Chimney is a set of sheer 300m cliffs with quite a view point.  The middle of the Chimney used to be an extreme hiking access to the Giant, but was eventually closed for safety reasons – of which were readily apparent.  As a background to all of our photos, the wind was consistent and blustery and with each photograph taken we were was as close as we would care to venture to the edges.  Previously, I had only seen similar sheer cliffs in the Rockies. 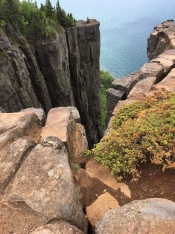 The second day of backpacking lead us around the feet of the Giant and crossing the length on the northwestern side.  We started our 12 km day clamouring over large boulders from rockfall.  While these provided a welcome change to the easy trail we had experienced to date, we were glad the boulders did not persist for the entire day.  Soon after, we would be climbing over the Giant’s feet and down to the shoreline on the opposite side.  Our weather was spectacular.

After about 4 hours, we arrived at Sawyer Bay, another great spot for our tents and camp for the evening. The campsite was sheltered in a small bay and allowed us to have another supper time view of the lake and terrain. 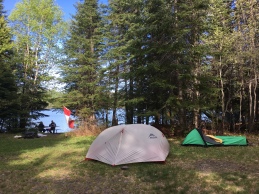 This time, our trip around the Giant had now lead us to the Head trail, which we accessed by backtracking a bit from our campsite.  Normally a long day hike, the head trail is also fairly steep, as are most trails to the top of sheer cliffs.  Our 4 km return trail would take us through tall poplar filled forests to the hot and arid pine barren on top.  This was much different day than the previous one, with little wind and we were able to enjoy the sights without having to consider being blown over!  The views from the Head trail were more expansive than the Chimney, and were clear through to Thunder Bay and the mountains across Lake Superior. 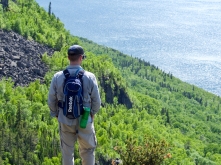 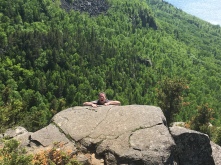 The second day of backpacking was full — and we settled in for the night with a fire to keep away the mosquitos.  We were thankful that we only had a taste of the bugs normally in this area, as the evenings were still fairly chilly and close to 0 C.

On day three, our 8 kilometre return trip to the campground was a welcome breeze — and we had ended off the backpacking portion of our trip in likely the cleanest fashion we’ve had in likely all of our trips.  This of course, necessitated a photo.

We returned to Mary-Louise campground early in the day, which allowed us to read a bit of history on the park and see the displays on Silver Islet.  We also checked out the nearby cottage community and were impressed at the remaining history of the area. 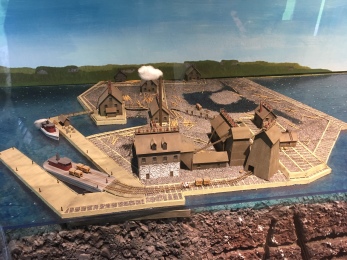 The following day, we started our way back to Thunder Bay and visited a couple of canyons, including Ouimet Canyon and Eagle Canyon.  While at Ouimet Canyon, I was in awe at the sheer depth and length of the hole torn into the rock.  I was wishing I could travel the bottom, but slowly realized it was large boulders I was staring at from high above. 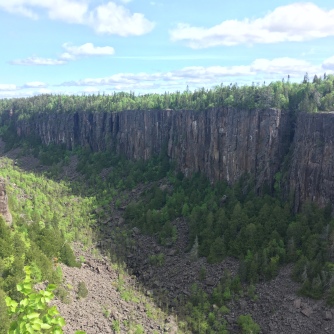 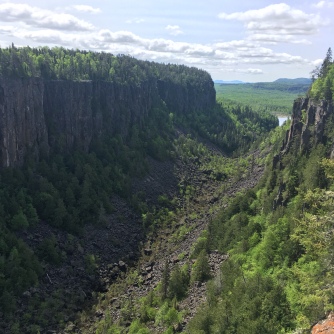 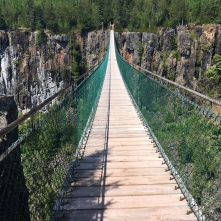 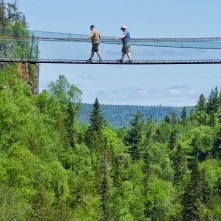 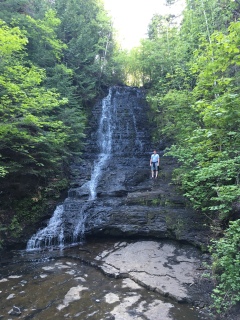 The last part of our trip had us visiting the Fort William First Nation lookout — a mountain with an expansive view overlooking the city.  Matt and I also visited Little Falls near our campground in an evening hike.  Because we camped in the same spot twice, I took in as many late night and early morning sessions as I could at Kakabeka Falls given that the second highest falls in Ontario was only a minutes walk from our tent!

Knowing the history of the area, it had certainly added meaning and understanding to our adventure.  The Sleeping Giant would be a park I would revisit on a cross-Canada tour to such a far away land from the Maritimes.

Sunset at overlooking the Sleeping Giant from Mary-Louise campground

One thought on “Backpacking The Sleeping Giant: Thunder Bay, Ontario”