Canoe-tripping or traveling by canoe is a new thing for the MacDonalds.  We recently started canoeing with friends and have discovered it was a fun way to camp in the outdoors and which also allows us to bring most of our camping gear.  While certain canoe routes require portaging gear, sections of the St. Croix River give the opportunity to travel a distance with little of the gear lugging.  A car shuttle is however required as its a one way trip. 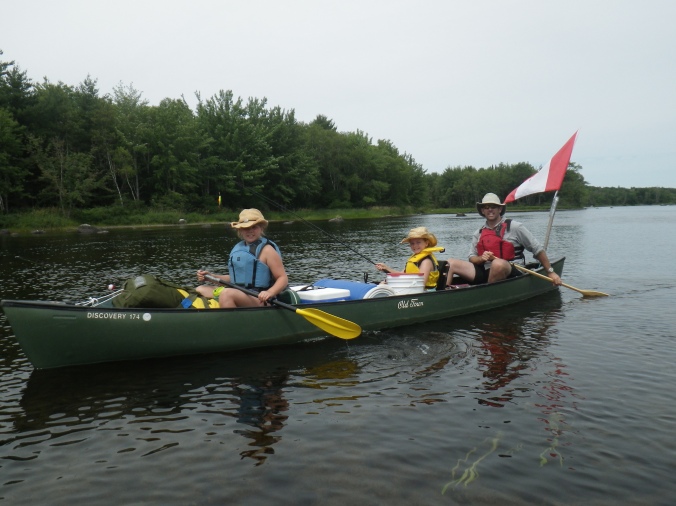 For this trip, we have been learning of the St. Croix from Rheal’s family, who have been tripping this river since they were kids.  The St. Croix River is known to be the International Waterway Paddling route, as the Canada-US border follows the river from Spednic Lake in mid-southwestern New Brunswick all the way to the Bay of Fundy at St. Andrews.  The St. Croix River is also Canadian Heritage River and along with Passamaquoddy Bay was the first place of French colonization in North America during the 1600s.  The river was used for fishing, logging and travel between countries for centuries.  The water levels are now controlled by release of water from the Spednic Dam, which will allow higher levels throughout the summer.

With that history in mind, I was looking forward to our trip introducing our children to the area. Our  trip involved a section of the river that is made up two 4 to 5 hour days of paddling , from Vanceboro through to Scotts Brook, a campground at the end of ‘highway’ 745 closest to Beaconsfield and Canoose.  (‘Highway’ also means dirt road this far west in NB.) The river is managed like a park by the St Croix Int’l Waterway Commission with maintained backcountry campsites with pit toilets and groomed sites in some areas.  Throughout the area, there are strict rules with the border and its ‘one country camping’ policy.   It is useful to take in some of the trip planning information found online.  You can also check out the water levels prior to your trip. 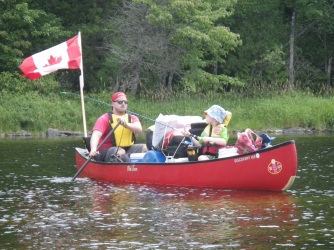 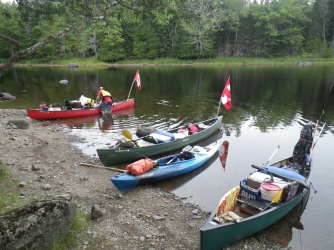 Our sections of the river involved faster water with ‘rips’, some ‘dead’ water areas with slow current and the highlight of the trip, ‘Little Falls’ — a long steeper set of fast but passable rapids.  We traveled from Vanceboro to Halls Brook on our first day.  With the hour and a half car shuttle, we had a later start at 1130.  (There are shuttles available to make the most of your time, although with cost. ) 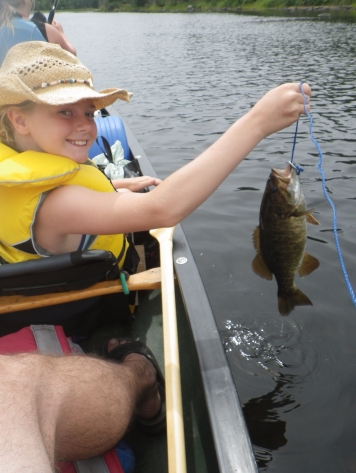 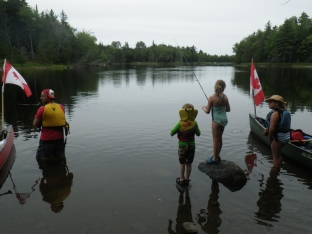 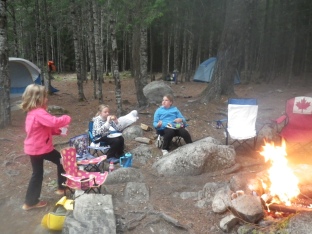 The girls immediately went to fishing, trying out their suggested bass lure.  Not a minute after casting, Rebecca was chatting and realized she had a fish on the line.  With squeals from both girls, and everyone thinking we had tipped in the first minutes of paddling, I helped her lift the 11 inch fish into the canoe.  The goal of the rest of the trip was now set: how many and how big can we catch! We traveled the rest of the day enjoying the scenery, seeing the American camps from the water, fishing and swimming where we could. 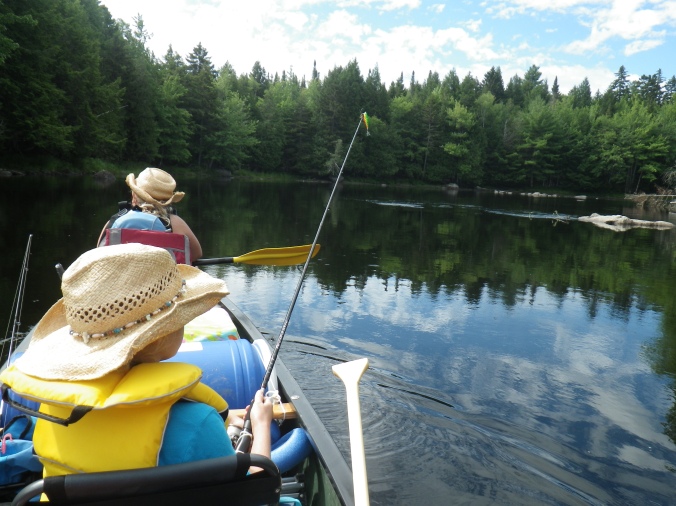 I’m learning a lot of paddling tips from Rheal and Justin.  Mostly on navigating the river, following a route and reading the water in front of you.  Kayaking rivers does take a lot less planning, but a loaded canoe is certainly a challenge in faster water. 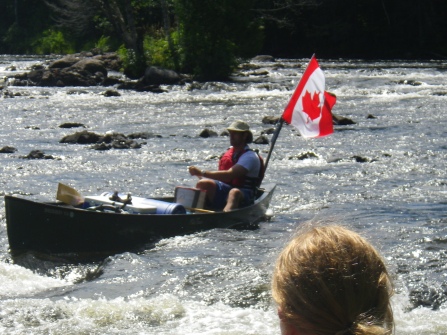 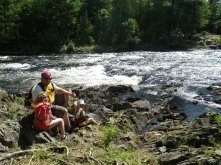 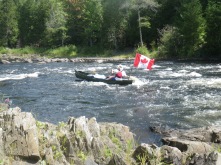 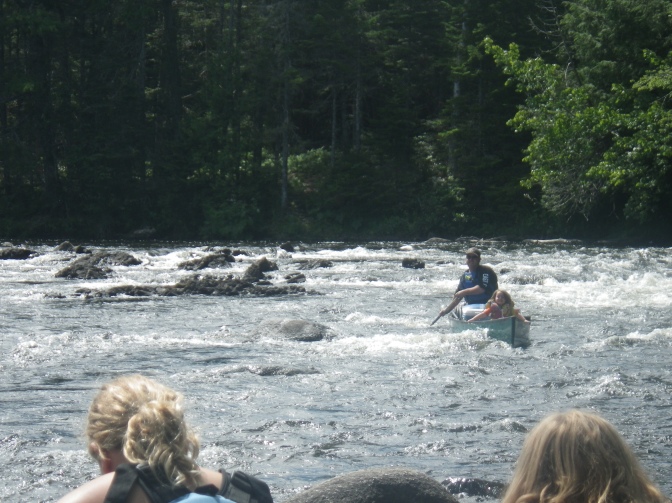 Our second day is planned well, with knowing that Little Falls are up ahead, to start the day off with a challenge that may involve getting wet.  When starting from Halls Brook on the second day, on a two day trip, there’s less consequences for tipping when your gear can dry off at home.  Its also a bit prudent to tie in your equipment and portage the loose items just in case.  We all made it down the falls without tipping and even had a surprise when Justin’s 3 1/2 year old could be seen enjoying the view from the front.  After watching everyone go down one at a time, the adults and kids then had their fun swimming the last section of rapids.

After Little Falls, we continued our trek downstream — most notably in the calmer areas between rips, Rebecca wanted to ‘treasure hunt’ for items that the previously tipped canoers may have not strapped to their boats.  Last month, Justin found an expensive waterproof speaker in the waters south of the falls.  So, as we slowly made our way, Rebecca lowered herself in the water and ahead of the boat swimming the river and diving down for possible treasures.  After reaching the end of the slow pools, she climbed in for the rest of the trip. 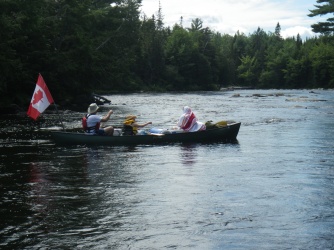 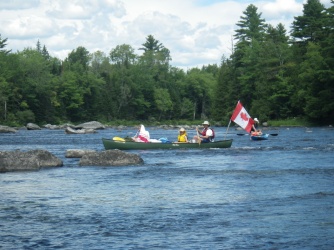 Learning the techniques of moving the boat with a single paddle and paddling techniques such as quick thrust to turn the boat around a rock were great fun practicing.  The girls did have their own roles in helping us stay afloat by leaning into the rocks we went against, calling out ‘sleeper’ rocks among others in the river and helping out paddling.  It was those times we were working as a team in a family boat, how neat is that! We still were hung up on a few rocks due to my route finding skills.  (The photo does show the looks on the girls faces as we were just getting stuck! 🙂 ) 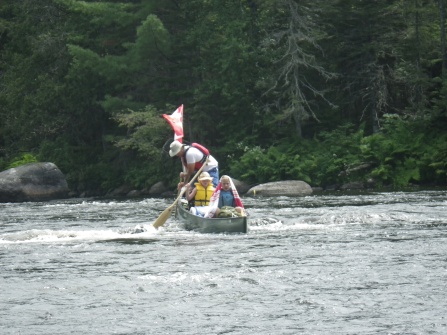 Hmm, caught on a ledge… 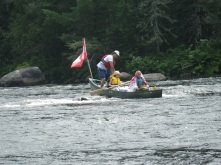 Whoo hoo, we made it?

The second day ended at Scott’s Brook, a beautiful camping area.  We made plans to revisit and do a farther trip to Loon Bay, another day of canoeing further south.  Thinking of extending the adventure, I had been thinking it would be neat to have the time to make a week long trip of the whole river.  For now, the girls have settled in on their new ‘tradition’ of doing a yearly trip to the ‘StCroixes’ as they say.  I can’t say I’ll mind. 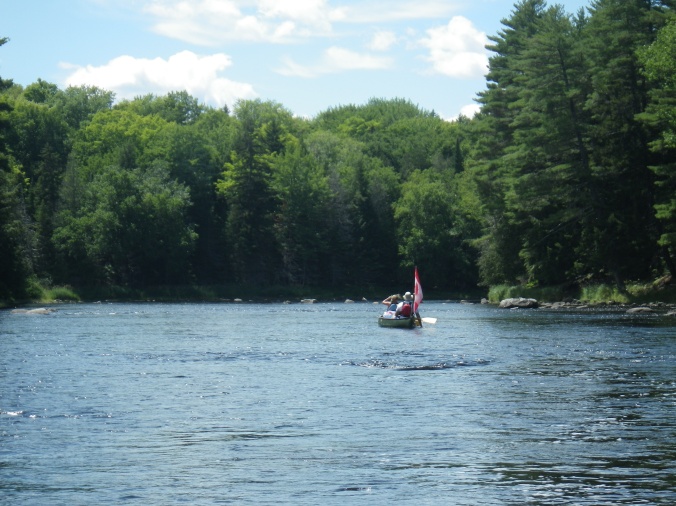