We all headed into Saint John today for a big of a different day.  The girls had an indoor track and field meet called Run Jump Throw Wheel (RJTW) — put on for the area schools.  The girls were kindly registered by their father for 4 events: 3 running and 1 'field' event.  They did really well at their short and long distance runs.  Both ran with either older kids or ones that were really fast!  Probably the most fun was had at the field events .  They tried a standing long jump, standing high jump and shot put.  All were a big hit.  Abby liked the shot put and came in 3rd and Rebecca did well at the long jumbo coming in first. We had a ball !  The other exciting thing about the day was two of their school friends also went and they were cute in their little team. 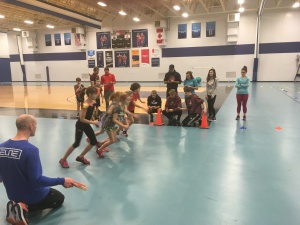 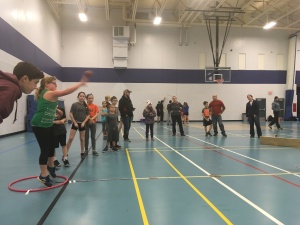 After tiring the kids out , we stuck around for their first SJ Seadogs QMJHL hockey game.  The kids were excited to see all the sights and sounds at the rink.  With 13 goals total and one big fight , they had their fill.  It was funny to see them surprised by the hitting at the boards, with  Rebecca saying, "that's called Checking!".  Hilarious.