Here's our yearly photo of Rebecca and Abby heading off to school.  Rebecca is in Grade 4 and Abby in Grade 3.  They're quite independent now and Sheena and I reflect on how far we've come from daycare to them growing into little ladies.  Rebecca is still interested in piano and chess and will be doing both again this year.  Abby is starting chess too and has been interested in helping out with horses at a barn nearby.  Hopefully we'll be able to make that happen soon!  Both have been doing a 'kid fitness' class at the Sussex Civic Centre after school a few days a week.  With the fitness class, they enjoy the chance to do circuit workouts, runs, yoga, track and field and other sports.  They usually finish the afternoons off with a swim.  It's great how confident it has made them about their own fitness.  Abby is also a non-stop biker.  If her bike is around, it is not unusual for her to spend any spare time at home going up and down the driveway, even before bedtime.  Hard to say no to that!

The ladies have been busy these past couple of weeks and did a couple of runs in the area. 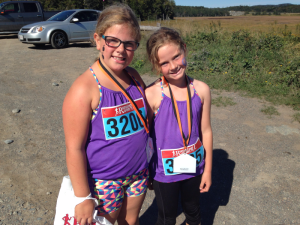 Here they are at a fun run at the Irving Nature Park in Saint John.  The news with that weekend was that they did two runs on the weekend, one on Saturday and Sunday.  Here are both of them waiting at the starting line in Hampton. 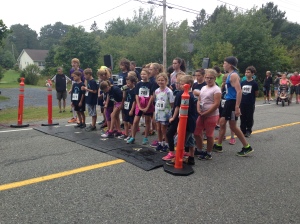 It seems that both are always excited about the medal at the end of the race and the popcicle.  If a race has a popcicle or freezie at the end, they will talk about it forever!  They usually also see a friend from school or make a race buddy friend during the day.

We also had the chance to take them to the Gagetown Fair a couple of weekends ago.  The fair has lots of events, including rodeo type competitions, animal judging, and of course fair type rides.  It was our first year this year at the event.  The girls came home from school and said 'everyone' was talking about going to the fair on the weekend — so naturally, we found ourselves heading out.  Here's Abby looking great with her Stampede hat from a couple of years ago.

Aim before you shoot!  Abby wanted to try out all the games.  She actually hit two with one cork – a skill she'll have to teach us. 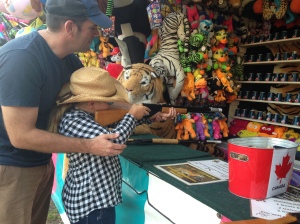 Eventually, it was time to ditch their parents when their friends arrived.  Once they did, both joined their schoolmates and ran around trying out different rides with them.  Because it was one of their first times in memory doing these types of rides, they wanted to try every one of them — not realizing how their stomaches would feel afterward!

The schools are great in the area for hosting fun runs as part of their track and field.  This past week, they were in Sussex for the school sponsored runs.  Rebecca and Abby came in the same positions as last year — and were quite excited about it.