We're catching up on October's photos after a short hiatus.  Of course, starting off the month was Abby's birthday. She was lucky to have 2 cakes this year: one at Nana's, one at our house.  She was excited to turn 7 and we can't believe how fast she is growing. 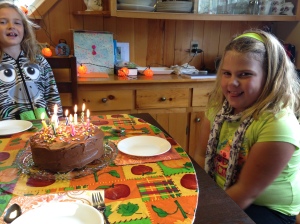 Her exciting gift this year was another lego set, which they promptly set up and played with throughout the day.  Still during our trip to Moncton for that weekend, we headed out on a beautiful Sunday for some apple picking in Cocagne at La Fleur du Pommier.  When we arrived, we were greeted by a scenic orchard and outdoor shop for all your apple and vegetable purchases.  It was such a nice day and we even were able to climb ladders into the trees.  Needless to say, we left with 30 lbs of apples that were gobbled up in only a couple of weeks. 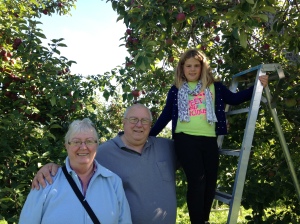 Ever since starting her biking at the end of the summer, Abby has been a biking fiend.  Whenever she can, she will go to the shed, dig out her bike and helmet and ride up and down the driveway.  She even wanted to bike after suppers and down to the end of the driveway for the bus in the morning and from the bus in the afternoon.  She loves the freedom of biking for herself. 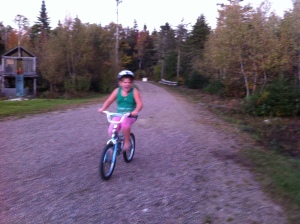 In early October, we had a sudden rain storm in the maritimes.  Our area in Belleisle was particularly hit hard with a significant amount of rain (200+ mm).  With lots of rivers and streams leading to the Belleisle Bay from hilly surroundings, we actually lost many bridges an culverts overnight.  Thankfully there was only one serious accident that night due to the disappearing bridges and those people have since recovered.  But for a while, we were taking a series of detours around the main roads that were washed out.  The below picture is our bridge which leads to our store and the way to the highway.

It was finally fixed this past week with a temporary single lane bridge.  All are happy now and many were taking a trip down to the bridge just to see if the road was finally open.  Going to the post office is less of a detour now!   During Thanksgiving, we had an enjoyable visit from Gramma and Grampa and Laurena and Nick.

The girls spent lots of outdoor time and we had campfires in the evening with plenty of laughs. Nick wanted to participate in the biking and took Abby's bike for a ride. 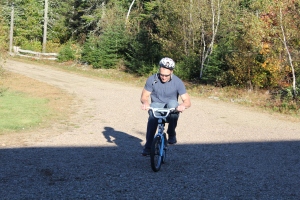 And, rounding off the month was Rebecca and Abby's favourite week…Halloween week!  We went to a few haunted house tours around the area, trying to get as many scares out of the kids as possible.  The haunted house in Norton had the girls screaming pretty near every room, which was hilarious.  Even Sheena had a few moments herself.  Here' Rebecca with her friend Daniel.

Abby was her favorite Dracula for Halloween.   Here she is at the Belleisle Highschool Spookfest.