This year, our yearly (EPAL) trip brought us backpacking in the High Cape Mountains of the Cape Breton Highlands, specifically from Meat Cove to Red River.  Meat Cove is one of the more remote communities in Nova Scotia situated north of the national park and is home to a few residents and a campground. Red River is a small hamlet joined with Pleasant Bay, which lies on one of the Cape Breton Highlands National Park boundaries.  The two communities are about an hour drive apart through the winding and scenic hills of northern Cape Breton.  In between the two communities lies barren wilderness, river valleys, scenic highland plateaus and several ocean coves and beaches.  Since as early as I can remember thinking about hiking, I used to stare in curiosity at the  topo maps my Dad owned, tracing a finger over the areas between the top of the island and the well known areas of the National park.  ‘What is in there?’ I wondered.  This hiking trip was fulfulling a curiosity and a dream of mine at the same time.

Our plan was to hike southwest from Meat Cove and reach Pollett’s Cove in three days.  Pollett’s 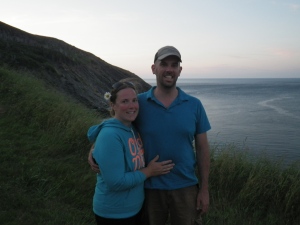 Cove is still one of the little known hiking areas in Nova Scotia.   Once government owned land, it was later bought by a local lottery winner and is not signed or maintained.  With rolling grass pastures, a long remote beach and surrounding river valleys and mountains, Pollett’s Cove  has always remained a beautiful image in my mind from our early 2000s visits.  The trail to Pollett’s Cove from Red River is challenging and as we found overgrown in areas.  However, it is hard to beat the long climbs through the pastures from sea-level to rocky trail through the forest. The Pollett’s Cove trail is about 9 kilometres in length and takes about 2.5 to 3 hours one way.

There is however no trail that exists between Meat Cove and Pollett’s Cove.  In asking some of the locals at Meat Cove, there had been attempts to begin cutting a trail south, but no complete trail had been made.  During our research, we found that several other hikers had taken different routes, which could be summed up as either  inland or the coastal.  Taking from descriptions  we found on the inland route — and from our experience travelling in similar terrain — we decided to keep closer to the coast in the hopes it would avoid marshland travel which is characteristic of the highland plateaus.   After remembering a 2001 trip to Pollett’s Cove and a subsequent adventure along the Blair River, we knew that the terrain can be thick with a variety of vegetation, including dreaded thickets of intertwined alder trees.  As a result, our routefinding would be based on our map direction, but also highly depended on the vegetation we were presented with along the way.  I had also read that most of the headwaters of the brooks leading into the river valleys were choked with alders and impedes travel significantly.  Lastly, in keeping to a coastal route we also hoped for  nice views of the ocean and coves along the way.

After our arrival in Meat Cove, we spent the afternoon relaxing in the hot sun, chatting with reunited friends and lounging on the beach below the campground.  Meat Cove has certainly grown up (as much as a remote community can) and now sports a restaurant, licenced snack bar, kayak rentals and even campground wide internet access.

On Monday, July 15th, Kris, Matt and I took our usual pre-hike photograph.  It was the beginning of another 30 celcius day and it was already hot at 7am.  Ka

ren and Sheena were also readying for accompanying us along the hike toward Lowland Cove, where they would part ways and return to Meat Cove, while we climbed the high Capes to start our bushwacking adventure.

The climb out of Meat Cove follows an old cart-track/ATV trail, switchbacking occasionally to a pasture area above the campground.  From there, the trail splits into two paths that lead to Cape St. Lawrence and Lowland Cove. We headed toward Cape St. Lawrence and continued our coastal approach.

pasture around what appeared to be an old lighthouse foundation.  We continued the long descent to the ocean and were wowed by how the forest opened up to the barren landscape along the ocean shore.  Immediately, we were blasted with a steady wind from the ocean.  Reaching the rugged jagged cliffs and gazing out at the ocean, I had the feeling that we had approached the end of the earth. The view was clear and we admired the shoreline and white caps on the ocean while taking a break 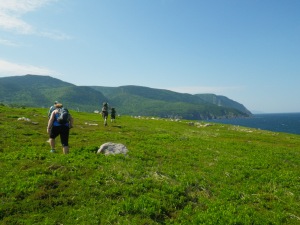 from the wind behind the foundation wall. While eating strawberries picked from nearby, I watched the gannets out in the ocean circling and nose diving into the water.
We continued toward Lowland Cove, mea 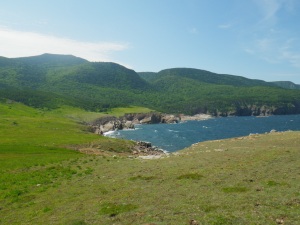 ndering through a trail through low grass and brush.  I began to see an abundance of wild strawberry bushes, which I would see were concentrated in the grass and plateaus throughout our trip.  The trail to Lowland Cove was marked with red flagged rebar stakes most of the way.   To our surprise, we came upon 13 horses grazing just before arriving at Lowland Cove.  Lowland Cove holds true to its name, with the grassy land on either side flowing down toward a picturesque rocky inlet.  We took a break near where the brook flows into the ocean at Lowland Cove and discussed our ascent 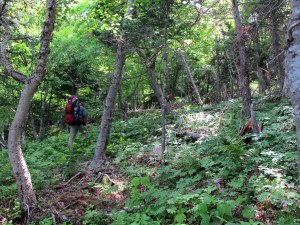 of the hills laid out before us.

After bidding our well wishers goodbye and receiving a few worried hugs in return from them, we began our slog to the top of the hills.  We made our approach as straight as possible, but this was tempered with a few switchbacks due to the steepness of the terrain.  The sun was beating down on us whenever we left the tree cover.  We pushed our way through the thick trees lining the slopes and eventually found sparse woods near the top of the first hill 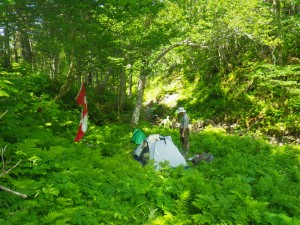 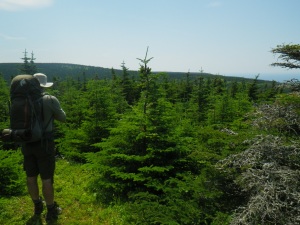 above Lowland Cove.  From there, we continued to stay on our route, but avoiding the thickest parts of the woods.  Halfway into the hot afternoon, we managed to arrive at our first campsite at Lowland Brook.  One of the only flat areas near the river became our campsite for the night. 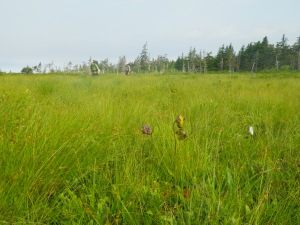 Day 2 was a day of traversing the High Capes.  We had already experienced what the terrain was going to present us and formulated our plan to hike as straight as possible across the plateaus, staying away from the headwater alders, but also avoiding a coastal approach as much as possible due to the steep valleys leading to the ocean.

There were times during the day when we realized in order to accomplish this, we had to push straight through tree and alder thickets, knowing that avoiding to one side or another would only delay the inevitable.  We did manage to find a few grassy meadows and marshland, which spread out the difficult travel.  The heavy fern growth was also a bit of a blessing and a slight curse as it usually meant clear travel, but you couldn’t see what was at your feet (fallen logs!). We finished our day having hiked farther than planned, staying at Upper Delaney’s Brook.

Day 3 was one of our more scenic days of travel.  Despite the views, we would also have some of the more difficult and unavoidable alder thickets we had found to date.  Most of the day we had spent finding weaknesses in the alders to continue in the grassy flat travel.  At one point, we did try to avoid another group of alders and kept a bit farther north of a pond, leading us to an exquisite view, but a fair bit of correction to our route 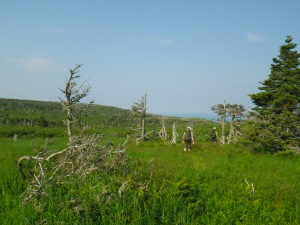 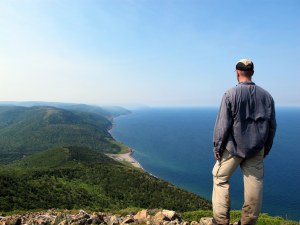 as well.  While getting closer to Pollett’s Cove, we had begun to traverse a funnel of terrain bounded by the slopes at the ocean side and the deep expanding valley of the Blair River.  As we approached Pollett’s Cove, the view of the Blair River gorge was almost as nice as finding a grassy route through the woods leading to the summit above the Cove itself.  We all shared a ‘Yes!’ when we could see that our way was clear with low grass and bush.

Once reaching a look out point above Pollett’s Cove, we revelled in the view of the Highlands and their beauty.  However, what laid before us was a challenging and somewhat tricky decent through, yes, alderbushes, but made more difficult with  wet and steep rocky terrain on our descent route.  There were several areas which required some downclimbing on wet mossy rocks, which is made more tricky with a heavy pack.  After a nearly two hour climb down and through the thick forest surrounding the Cove, we reached the grassy slopes familiar to us – again to 30+ temperatures.  After reaching the beach, we dropped our packs by the trail end and waited (and waited) for Sheena and Karen to arrive. 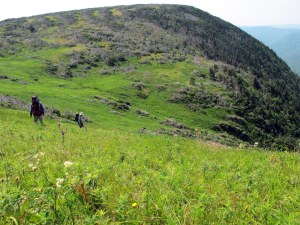 After a couple of hours, Sheena and Karen arrived in Pollett’s with treats from a local bakery (to much fanfare) and a few stories of their mis-adventures in meeting us.  Reunited, we set off to set up our camp, but also enjoy the scenery and surroundings. 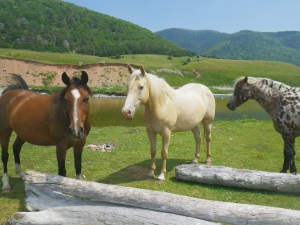 However, before heading to bed for the night, we would receive a bit of rain — our first in several days.  Little did we know that it would be a sign of weather to come.

Day 4 began for some of us very early in the day due to the heavy rains throughout the night.  A storm had blown in off the ocean, carrying heavy winds and sideways downpours that battered our tents.  Realizing that it was not going to let up anytime soon, we made our plan of dismantling and leaving the exposed cove as quick as possible.  I managed to cook some breakfast while Kris and Matt waited patiently in their raingear.  After packing up, we began the slow uphill climb out of Pollett’s Cove pelted by rain and as low cloud and fog slowly filled in around the cove.  The return trip on the trail was one of the wettest days I’ve had while hiking, spent mostly with my head down concentrating on ‘just getting out of here’.  Despite the weather, when we did have a sight of the ocean and the coast, it impressive to see the white caps and waves bashing against the rocks.  A very cool view was also seeing 20 + seals bobbing in the water just off shore.  Sheena thought the nasty weather was fun for t

Thankfully, the rain let up near the end of the trail and we were able to change into dry clothes once we reached the cars.  Our relief at reaching the warm dry cars couldn’t have been more evident as we all quickly changed, packed our things, said our quick goodbyes and headed off onto the road.  We were already tired from our last four days, but the weather seemed to draw all the energy from us!  It was a different ending to our yearly hike, but the preceding days were a memorable adventure.

For a GoogleEarth track of our trip (created by Kris Griffon):

GPS track of the trip, in a GPX file

Note: all photos of Dave were taken by Kris Griffon.

Update: This post has been featured in the Cape Breton Post during a series on Meat Cove and Pollett’s Cove.  See the series here: