Its time to catch up on a few photos from our goings on in the last little while.  Rebecca and Abby have been crazy about all things 'Angry Birds' lately.  For those that don't know, Angry Birds is a little game available on an Ipod — but who's pictures are recognizable to any kid from any distance, whether they play the game or not!  Here's Rebecca sporting her Angry Bird tattoo, hat, and shirt.

Abigail turned four on October 2nd!!  We had a little get together a few days before as Oct 2nd was a weekday.  Here she is blowing out her cupcakes.  The funny thing about Abigail is that she believes the month of October is her birthday, so we are constantly reminded that it is her birthday whenever something reminicent of cake, treats, presents, and fun things happen throughout the weeks after. 🙂 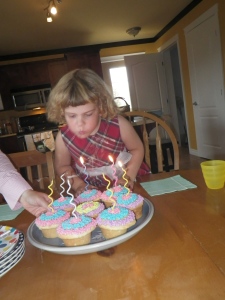 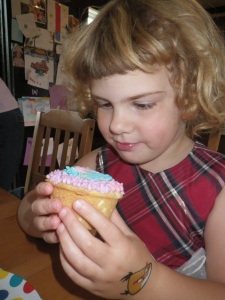 The weekend prior, we took the girls along with a few other people from work and their kids, to MacKay's Orchard on the Kingston Peninsula.

The orchard is a beautiful spot.  The kids can pick apples from the ground, but the best are found sometimes up high!  This year has seen some great apples.  We usually leave with a 30 pound bag, and a 5 pound stomach!

After apple picking, we returned to a friend's pumpkin patch and picked four pumpkins for cooking up later in the month.  Rebecca and Abby picked out their own pumpkins amid the fun muddy fields.

A couple of weeks ago, we started building Sheena's workshop.  She has wanted one for a while (so have I — mostly to get my shed back, ha!)  as her list of projects seems to be steadily increasing.  We wer lucky to have some friends to help out with the framing and a dry Thanksgiving Day for roofing and side walls.

Abby was helping Sheena with the walls at the back of the workshop.  She's pretty eager to measure and mark.  We have the walls done now — just need some painting and electrical setup before the weather gets really cold. 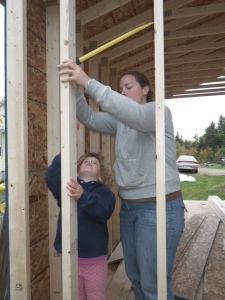 Last weekend, I took off to meet some people from the New Brunswick Hiking group (facebook).  We spend the day hiking to Turtle Mountain in the Welsford area (near Saint John).  It was mostly ATV type trails, but the high points were well worth the trip.  Also entertaining were the 5 dogs that went with their owners for the 24 kilometer trek.

Here's four of them, Molly (orange), Willow, Buffy and the 'S' dog (can't remember his name!).  Missing is the shitsu, which I was totally impressed with given the mileage we put down on the trail!  Willow and the white and black 'Buffy' were best friends, even though Buffy told Willow what to do the whole time.  Willow spent half the time warding off the playful jumping neck bites from Buffy. 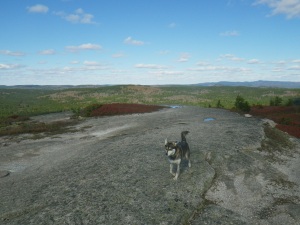 And finally, some photos from today.  Here's Abby posing in her church dress, which she likes to wear all the time!

And the result of their instruction to 'strike a pose' for the photo.  We have 'Princess' and the 'Witch' — as you can see, they are preparing their poses for Halloween.