On the last weekend in June, Kris and I met in Sussex and headed to the Hammondvale area for a day of biking just south of Sussex, in the Fundy Foothills.  In the rainy weather, we planned to bike a distance to The Falls Brook and Hemlock Brook along the Dick's Lake Road.  Both brooks are tributaries of the Big Salmon River and lie north of the river hidden in the valleys leading to the Fundy shore.  We had been in the area prevously last year to Mary Pitcher Falls, though just east of where we were heading on this day.  The bike ride proved very enjoyable, although mostly uphill for the 18km ride to the valley.  We found a really nice downhill stretch near the end and cul-de-sac sort of trail.  At the very end of the road was a backcountry campsite (unofficial) with a few RVs set up haphazardly for weekend campers. 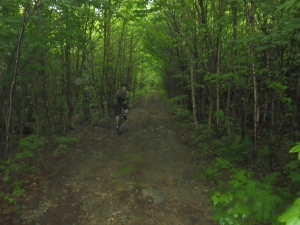 At the end of the paths, we dumped our bikes and switched to our hiking boots and gear for the downward trek to the Falls Brook.  Once on the bottom, the green lushness of the valley was very 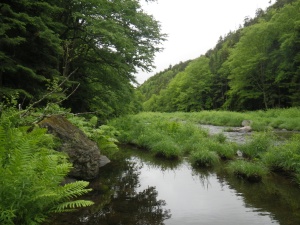 impressive. A slight mist kept us at the perfect temperature.  First, we headed upriver toward Hell's Kitchen Falls.  The falls used to be a difficult spot for loggers, mostly due to the zig zag type rock canyon which houses the falls.  When we arrived at the falls area, we could hear the falls, but they were hidden behind a rock wall.

Kris headed up the slope to find a good vantage point.  I chose a more direct route.

Once around the corner, you could see the falls.  The water was a bit cold, but a very deep pool lies below the lower section.  Another pool is up above, but hard to access from the lower level.  Some have taken photos of these falls from the eastern  side of the surrounding cliffs.

After a lunch and exercise, we headed downstream toward Hemlock Brook.  After only 20 minutes of hiking, we found Hemlock Brook and followed it upstream toward the larger drop of the few before us.  We found a high rock wall with a nice fall flowing down the middle.

We also noticed there were also some giant frogs frolicking in the fresh ferns on the forest floor!

The ride back to the cars was exquisite, with some really long downhill sections.  Our final tally for the day was 44 kilometres, sending Kris' exercise-o-meter off the charts.