The Beaching season has begun.  A month ago, we headed to Saint's Rest Beach in west Saint John.  The fog was held at bay by the west side and we had a wonderful but windy afternoon.  Of course we were kept to the sand as the Bay of Fundy water is a bit too cold to swim any time of year.

Earlier this month, we took the girls to their very first show at the movie theatre.  Instead of a short planned trip into Saint John, we ended up spending the day in the city after missing the first showing (unbeknownst to us, you have to reserve seats online now for movies in Saint John, so all early shows were sold out or reserved).  Nevertheless, we managed through the day with pizza and playground time.  Both girls waited patiently for their first movie experience.  Abby was especially excited for the popcorn.  Once their movie (Madagascar 3) came on, it would be easy to say they sat mesmorized for their time in the theatre.  It was a lot of fun.  Here's Abby and Rebecca waiting for the show to start:

(Rebecca had to sit on my lap as there were only groups of 3 seats left!)

Last week, while on vacation, we all headed to Cape Breton for a series of events.  First, we attended the wedding of Rodney and Gayle MacDonald in west Lake Anslie.  It was a beautiful ceremony and fun was had by all at the reception.  The night was not uneventful, most particularly for us with Sheena's 'catching-up', Nick's wardrobe updates and Mom's pleasant encounter with local 'leo's.  All were on our best behavior!

We had beautiful weather throughout our visit.  While we were also trying to paint the exterior of the store, our mornings were spent painting and the hot afternoons were spent at West Mabou beach.  It would be safe to say the girls had a great time at the beach — especially after we found a warm fresh water stream and pool leading to the ocean.  This stream is something I used to play in as a kid, making dams, sand castles and the like.  Its fun to see the kids having as much enjoyment as we did out of it.

Here they spend some time taking running jumps in the the water:

On another day, Sheena helped Abby and Rebecca with some rock designs on the sand.

Rebecca and Abby also made a sand castle city decorated with seashells.

Here Abby takes a walk toward the east end of the beach.  For our days there, there were no more than four other people on the beach at the same time.  It was like our own private beach!

Rebecca loves skipping rocks on the water.  We spent a good amount of time throwing and counting each skip.  Rebecca would shout out, 'One!' 🙂 , 'Two!', 'Three!'.

We walked up and down the beach looking for the perfect skipping rocks.

Here's Rebecca helping out with painting Dad's store.  We had an 'adventure' when both kids starting helping out and then the experienced the aftermath of having oil based paint on little helping hands. 🙂

Lastly, it is Mom and Dad's 40th anniversary this year (June 24th).  We had a little family dinner with Laurena and Nick as well!  So we must pass on our congratulations to Gramma and Grampa MacDonald.  In the words of Rebecca, 'You guys are m-a-r-r-i-e-d!' 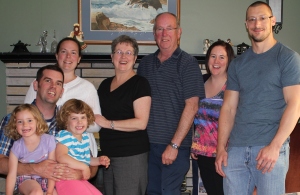 There was of course the 'altered dimension' family that showed up as well for the event.

2 thoughts on “A month of photos: Trips to beaches, rural wedding and anniversary, painting and first-time theatre”